The BJP Government’s ambitious Bullet Train project (amounting Rs.98,000 crore) between Mumbai and Ahmedabad has hit a new blockade. Surprisingly, the party creating the obstruction is none other than Maharashtra’s BJP government and it’s CM Devendra Fadnavis itself!

Yes, it is BJP Vs BJP this time!

The Devendra Fadnavis Government Is Against Building the Underground Station at BKC, Mumbai

Earlier, the idea was to build an underground railway station at Bandra – Kurla Complex (BKC) in Mumbai. The Railways had insisted a plot in BKC during the Make In India week in February, 2016. However, now it seems that the Devendra Fadnavis Government is not allowing the Railways to do so. The MMRDA along with the State Government is at loggerheads with the Indian Railways over the entire project. 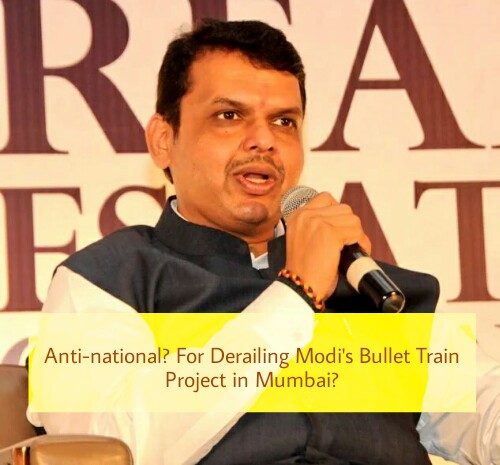 The reason being, the State Government has plans of developing and building an International financial services center on the same plot. So, the state government is against the underground railway station in BKC as that would lead to a revenue loss of Rs. 10,000 crore for Maharashtra state.

This situation has caused chaos in the life of an average BJP supporter. The reason being according to their definition of anti-national, Devendra Fadnavis is an anti-national after all he is being a villain in Narendra Modi’s dream project. However, at the same time they are confused whether they should hail the CM as he is thinking about his state’s revenue and income.

Perhaps Bhakts like Sadhvi Prachi and Yogi Adityanath can have a solution to this dilemma.No wonder, for them a loss of Rs. 10,000 crore revenue is quite mundane as their prime focus is “Ghar Wapsi” and “Muslim Free India.”