This post is written by one of our readers Venkat NR

The death of Rohith Vemula is indeed tragic. But perhaps even more tragic is the act of politicising his death for scoring petty political points.

All the political parties are racing to Hyderabad to gain political mileage out of Rohith Vemula’s death and the subsequent student protests. All the opposition parties are vying to hijack the student protests in the hope of garnering Dalit support and putting the blame of Rohith’s suicide on the current government. Yes the BLAME for the suicide of a young scholar. 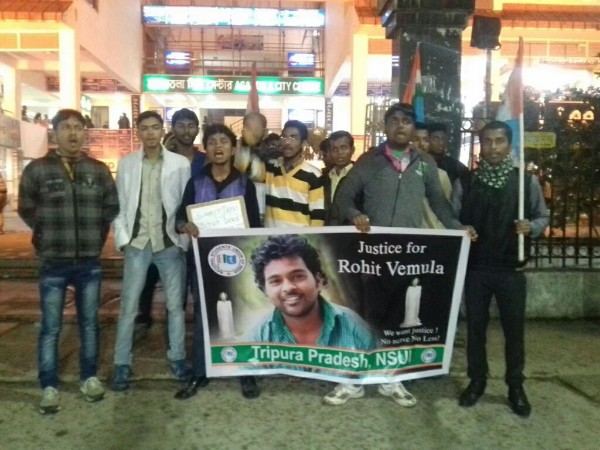 Who is to be blamed for pushing Rohith Vemula to take the extreme step?

It is indeed the first question that comes to the mind while listening to the media’s narrative of this unfortunate incident.

Let’s go in to the past to see what led to Rohith’s Suicide.

The prologue to this entire incident was the protest against the hanging of Yakub Memon which was supported by the Ambedkar Student Association (ASA), to which Rohith belonged. The AVBP was against the protest and this led to an altercation, which the ABVP claimed, soon turned violent and a AVBP leader was assaulted. The concerned ABVP leader, a Susheel Kumar, was admitted to the hospital two days later. The hospital reports say he was admitted due to appendicitis but also mentions injuries on the body. He later filed an FIR against the ASA for physically assaulting him. In the aftermath of the incident the union minister Dattatreya complained to the HRD ministry that the Hyderabad Central University has become a den of “castetist” and “anti-national” elements. The MHRD in turn sent 4 letters to the Hyderabad University and enquired about the incident of assault. The Hyderabad Central University’s executive council formed a proctoral committee and later found 6 members of Ambedkar Student Association guilty, one of them being Rohith Vemula and suspended them. These students were barred from all the institutional and administrative facilities including the hostels and some claim that the suspension drove Rohith Vemula to take his own life in desperation.

So who is to be blamed? Is the union minister Dattatreya to be blamed for Rohith’s Suicide?After all it was him who, in a letter to the MHRD, called the ASA as ‘casteist’ and ‘anti national’ for protesting against the hanging of Yakub Memon. In a free democratic country like India every citizen is entitled to the right to speech and if it is proper for a student group to protest against the hanging of Yakub Memon, a convicted terrorist whose actions led to the death of 357 innocent Indians, then I presume Dattatreya, as a citizen of the country, has the equal right to voice his opinions if he thought some student groups in the Hyderabad university campus as “casteist” and “anti-national”. We may not agree with what Mr Dattatreya has to say but he has every right to say it.

If not MHRD then the government, which nominates members to the executive council of the central Universities, must have played some role in abetting the suicide of Rohith Vemula? Most of the members in the executive council that decided on the fate of Rohith and other 5 students were nominated by the previous government and one of the prime members of the executive council is a Dalit himself and he upheld the punishment. Moreover during the UPA rule of 10 years nine Dalit students committed suicide in the same Hyderabad Central University. So blaming a single party or a Government for Rohith’s suicide or, broadly speaking, the caste based prejudices against the Dalits is inapt.

It is quite evident that at the root of the problem lies the very nature of student politics. The emergence of vote bank politics and caste based parties has divided the campuses of Indian Universities into caste and communal lines. Identity politics has overtaken developmental politics in the universities and due to the strong links between one’s party and one’s community; it results in fervid party cadres, which in turn leads to violence and flare ups. Though Rohith has not blamed anybody for his suicide but one particular part of his letter is worth mentioning.

He writes “The value of a man was reduced to his immediate identity and nearest possibility. To a vote. To a number. To a thing.” May be he is alluding to the caste based politics where one Dalit is one Vote. Perhaps he was disillusioned by caste based politics and the sorry state of affairs he was in due to the politics of the campus. May be I am reading too much between the lines but that’s just my opinion. Rohith was disillusioned or not but the stark reality of today’s student politics is the prevalence of caste based identity politics that divides the student community and leads to altercations and flare ups.

Instead of addressing the basic problems plaguing student politics the opposition political parties jumped into the government bashing bandwagon. In the aftermath of Rohith’s suicide it seems a sort of political musical chair is being played by the opposition parties. The ‘chair’ here is the Hyderabad University student protests. First it was the Gandhi scion Rahul Gandhi who rushed to the Hyderabad University to hijack the student protest and give this incident an anti-Dalit dimension to garner Dalit support. I really wonder where he was in the last 10 years of UPA rule when 9 Dalit students committed suicide in the Hyderabad University. Similarly the TMC, seeing the congress exploiting the suicide of Rohith’s to its advantage, raced to the University to give pro-Dalit rhetoric and paint the central government as the murderer.

The suicide of Rohith Vemula has indeed been a blessing for the TMC because it shifted the media focus away from the Malda riots. Instead of answering for the Malda riots and the death of the young Indian Air force corporal who was mowed down by the son of a TMC leader, Derek O’Brien is busy travelling far away from West Bengal to politicise the student protest only to score brownie points.

Alarmed that other political parties are successfully sensationalizing the death of a scholar for their political agendas, the king of sensational politics, Arvind Kejriwal, has now joined the Congress and the TMC in their petty game of political musical chair. Instead of investigating the allegations of corruption against AAP leaders in the alleged CNG scam in Delhi, the AAP supremo will now give tough competition to congress and the TMC in politicising the student protest.

So as long as the music lasts that is the media’s attention on the suicide of Rohith, the contenders will try to place themselves firmly in the ‘chair’ of Hyderabad student protest. And when Rohith Vemula will be long forgotten by our ‘TRP’ greedy media, the politicians will stop visiting Rohith’s family; they will move to richer political grounds where they will ‘fight’ for new victims and forget the old ones but identity based student politics and caste polarisation will continue to ruin more young lives and create more ‘martyrs’.