The last few weeks have been nothing but the beating of jingoistic drums, with entire India dancing to its tune. So much so that we have stopped thinking about anything else, but that.

Surgical Strike By India in PoK

That is one card which has never failed to garner some sort of a glorification for the Government in power, which makes everyone quickly forget about all the other wars which were supposed to be fought and gives the Government ample time to bask in the limelight of heroics as the gullible junta claps with glee at the “Surgical Strikes” taking place across the LOC.

No, don’t misunderstand me. I totally believe the surgical strikes did happen. If I believe that there have been numerous surgical strikes done by the army, in the past years, under various other Governments, I have no reason to disbelieve these ones just because it comes as a Television propaganda by someone whose credibility, about telling the truth, hangs by a very very thin thread.

So, yes, I believe the DGMO version of the surgical strikes though I might secretly laugh at the “Ghar mein 10 km andhar ghuss ke 40 terrorists ko maara, boss” version of the Arnab Goswami clan.

However, what cannot be ignored, is the shift of focus of the audience of India from development, poverty and black money to Pakistan and Pakistanis. And the entire Political class seems to be working together to ensure that this remains the case till the various upcoming elections are played out to their liking.

We are all cheering and clapping about Surgical strikes and the Indian Army hitting back at the Terrorists but we don’t seem to be wondering how come these Terrorists have suddenly become so active and so successful in their attacks.

Were the terrorists waiting for the “Weak” UPA Prime Minister to vacate his seat and the strong 56 incher to take up the command of India, before they started hitting out at our Military establishments??

Have the terrorists changed their strategy of attacking civilian areas, as they usually do, and started going on sure-death attacks against Army base camps, where they know that the attacks will be faced by tough trained personnel, rather than by scared incapable civilians and the damage will be minimum?

How are the Terrorists getting so close to heavily guarded Army bases when there is an advance Intel available?

How come we aren’t talking about the facilities given to the Army personnel? The infrastructure that they have, to deal with such attacks? The lack of Internal security which is allowing a breach of this magnitude??

Rather we are more satisfied equating Indian army to Hanuman in a quest to upgrade Narendra Modi to Lord Rama (thanks to Parrikar). As if the Army has found its guts and glory only after 2014 and didn’t know that they had a tail which they could set on fire and burn down Lanka???

And instead of the political class bringing out pertinent questions regarding the Internal security and the proper equipping of the Army, they are busy in going after the soft targets like Pakistani Actors i.e. if you can call Fawad Khan as an “actor”.

So, while mega corporates like Reliance, Adani and Jindals are most welcome to continue their trade with Pakistan, which goes in the excess of 7 billion rupees per month, the Senas of the nation are gung-ho about boycotting Pakistani actors from working in India.

Of course, we do not want to think about the fact, that these actors and artists come to India on Government approved Visas and Work Permits and all that the Government has to do is to not issue them these Visas and Permits, and they won’t be able to set foot in India, much less work in Bollywood.

And since Artists are definitely not terrorists, we can safely assume that they wont be taking the infiltration route into India and come and work in a SRK or Karan Johar movie on the sly.

But asking sensible questions, as to why a boycott is needed when a Government official policy can be made against giving them any visas, we are more inclined to start tooting the toot of a Raj Thackrey, whose fiery speeches against various issues is usually an attempt to stay relevant in the local corporation politics, especially after losing his face in state level politics.

Asking why the Indus Water Treaty is being scrutinized, when it is brokered by the World Bank and might prove difficult to get out of, rather than cutting off trade ties with Pakistan, would probably earn someone the crown of an Anti-National and a direct ticket on a non-stop camel ride to Pakistan, while the Ambanis of both the Nations are laughing their way to the bank.

It’s quite evident that when the jingoistic drums start beating, they drown the sounds of pretty much everything else around them.

And then, when you see the hoardings glorifying Narendra Modi, for surgical strikes and the accomplishments of the Indian Army, which can be nothing short of shameless political propaganda for the upcoming elections in UP and Punjab, the reason for the jingoistic drums to start beating in the first place, becomes amply clear. 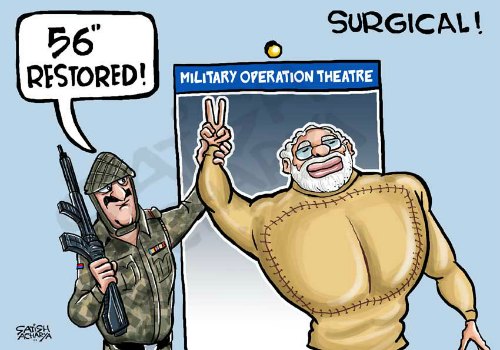 Disclaimer: This post has no relation to Modi banging on actual drums on various occasions, I admire the skill with which Modi has beaten all sort of drums and not just the jingoistic ones.